Well, thanks for 47 cents, actually.

On October 20, 2016, Emma Brown of the Washington Post wrote an article about the decline of funding in public education since the Great Recession beginning in 2008. The article can be accessed here, but the chart below says it all.

And this is the central point we should address with Governor Scott, Speaker Corcoran, and Senate President Negron: inflation. No one will deny that inflation has been at happening at historic lows due to the Federal Reserve’s use of monetary policy. But inflation has still occurred nonetheless. Costs continue to rise, and school districts all over the Sunshine State have been scrimping and saving to get by on shoestring budgets passed by the Florida Legislature during the last decade.

If we were to use the pre-recession high watermark of $7126 back in 2007-2008, adjusted for inflation that number would have to be $8726, which means eleven years later we are $1600 dollars behind. And yet across that intervening decade our costs continued to climb while the spending power of money earmarked for public education has continued to shrink despite the minuscule increases that have been made.

But let’s be honest with each other, Governor Scott, Speaker Corcoran, and Senate President Negron: all of you have been lying to the citizens of Florida. They are not outright lies per se, but they certainly are lies of omission. Take the word “unprecedented” that has been bandied about recently. That may be the biggest reach of any adjective in the English language the way you’re using it. It would be one thing if per-pupil spending in Florida suddenly jumped up to $10K…that might warrant an “unprecedented” tag. But simply calling any level of funding that tops the previous year’s “unprecedented” is abusing the adjective. The phrase “record funding” also belongs in this category.

My favorite, however, was this boast from Governor Scott’s Deputy Communications Director, McKinley Lewis: “Since Governor Scott has taken office, total operational funding for Florida schools is up 27 percent, while the amount of flexible funding to school districts has grown by 21 percent.” This is a classic case of cherry picking data to make the situation seem better than it really is. How so? The first year in office Governor Scott slashed education funding by just over 1 BILLION dollars. Look at the chart below for greater clarity. The modest decline in funding in the last two years of Charlie Crist’s tenure were a result of a state economy that is predicated on tourism and construction, both of which took a massive hit during the Great Recession. But the first budget approved by Governor Scott was the 2011-2012 budget and then the nominal increases over time for the rest of two terms. The most interesting observation about this data? The year Scott slashed the budget was toward the tail end of the macroeconomic trough we had experienced during the Great Recession and by 2012 we were in recovery mode. 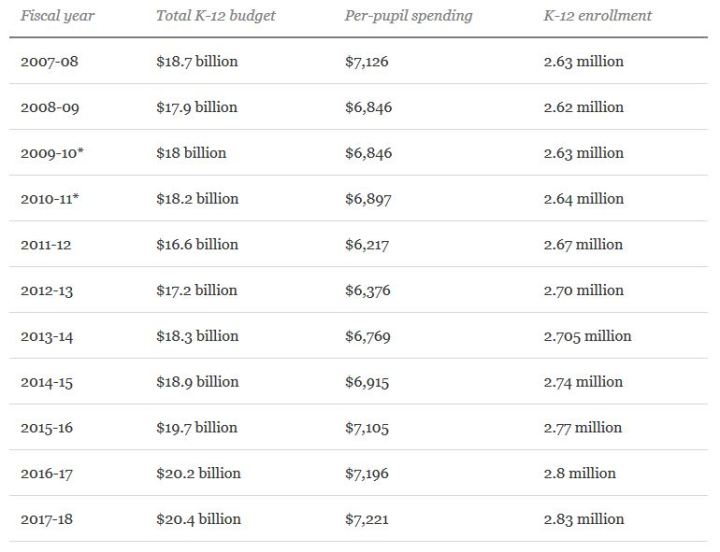 So why are we in such dire straits? Because of a lack of revenue (read more here). The GOP-led Florida Legislature wants to continually tout cutting taxes while starving essential services, plain and simple. All they clearly care about is the immediate future of their political careers, not making a meaningful long-term investment in the public institutions that will sustain future generations of Floridians for many years to come. There are numerous sensible solutions that have been proposed by many caring citizens, but these are roundly ignored by Tallahassee politicians who seem all to eager to cater to the whims of special interests and their donation dollars.

And so here we are. Governor Scott has signed the $88.7 billion budget, which increases the BSA (base student allocation) by a whopping 47 cents. All that remain are hard questions and disturbing facts:

How will this “unprecedented” level of funding help improve our national status as 44th in per-pupil spending? Numbers range in this metric: the highest seen has been 39th, whereas the lowest has been 50th when adjusting for certain factors; however, the number is consistently in the bottom ten states of the U.S.

How does the Florida Legislature and Governor Scott think this “record level” of funding will help abate the teacher shortage, especially in light of our salaries ranking 48th in the U.S. when adjusted for cost of living?

How long before we have a repeat episode of 1968? How long before teachers, which represent the largest public sector workforce in the state, demand that the Florida Legislature meaningfully fund public education? Even if we had kept apace with inflation and had $8729 per student, we would still be woefully behind the national average by at least $3000.

When will the Florida Legislature make a meaningful investment in our students and their future?

If you are curious about how #blockchain projects such as #Polkadot are going to shape our future, be sure to check out my new Twitter account, @ThePhunky1
Sprained my ankle rather badly last week, so I went to urgent care to ensure it wasn’t broken. Doc said stay off my feet for at least a week, but no matter where I am Richard Parker has got to get right on top of me!
Nothing beats a warm dryer... 😸
For all the #psychology students / fans in the house...this sign just cracked me up when I saw it 🤣
Two Pees, One Poop, and a PB Picnic
Lots of friends have been asking what I’ve been doing now that I’m officially on leave from @schschargers / @hillsboroughsch...

Want to Get Involved?

Teacher Voice is seeking guests to either write short posts (500 word limit) about current education issues or to discuss them in person for the biweekly podcast. Interested? Fill in the form on the Contact page or email directly at 1teachervoice@gmail.com