In preparing for the #RallyInTally today, I reached out to Polk County School Board Member, fellow advocate, and friend, Billy Townsend. We both planned to be here and knew we should record the first Teacher Voice podcast of 2020 as a discussion about today’s events and whatever else came up organically in our discussion. I will warn everyone that this is a hot take, recorded shortly after the rally wound down, and we pull no punches about what’s to come if we are to turn this thing around to benefit every child in Florida. Please be sure to give it a listen and share with others!

And when you’re done listening to the episode, don’t forget to join Florida’s Fully Inclusive Rebellion for Education (a.k.a #FLFIRE)! In the last two days we have gained an additional 700 members and now more than ever we need to sign up liaisons to help organize the rest of the state, county by county. We hold all the leverage at this point. We have all the power. All it will take is for us to unite and fight as one! 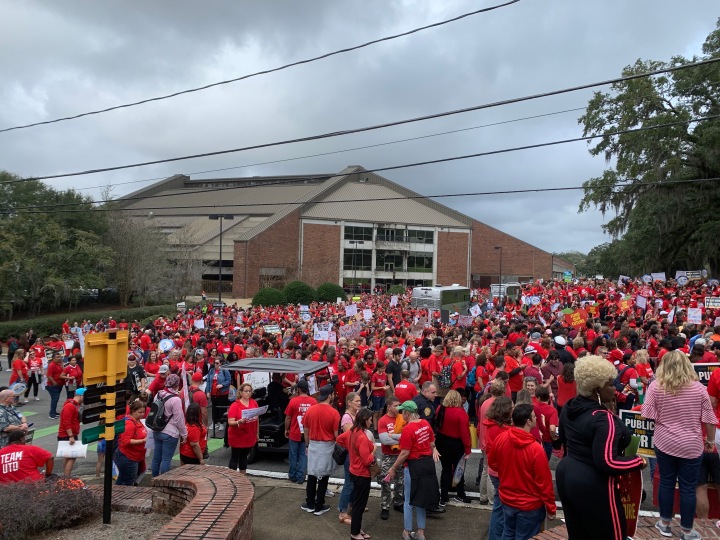 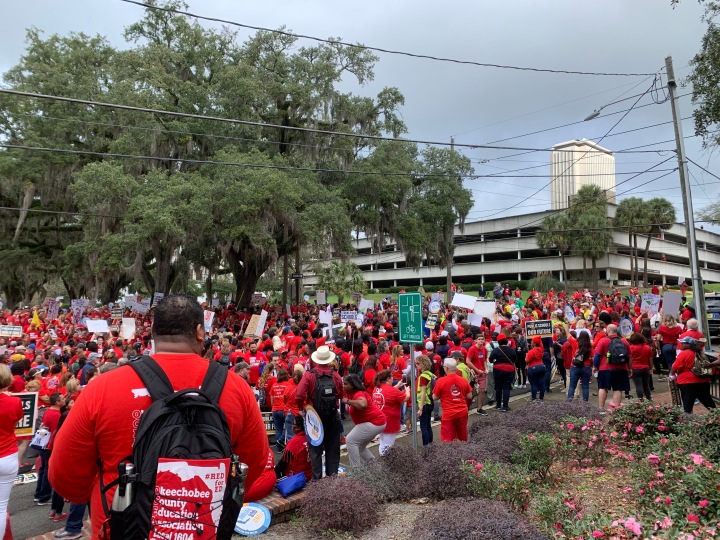 All across the Sunshine State, education professionals and their supporters just closed out National Teacher Appreciation Week. During this time, public education was celebrated by students and parents alike. Many people wore #REDforED to stand in solidarity with teachers in other states that have accomplished change by banding together, as well as to highlight the similar challenges we face here in Florida.

Many people also took to social media to share their support and to say thanks to those who work with our children on a daily basis. A few even used this platform and time to illustrate important points to our elected officials about the starvation budgets that have been served up during the tenure of Governor Rick Scott. These are a few of my contributions, for instance, that I used to help spread awareness and build momentum as we move forward to this year’s election cycle:

Clearly one of the most effective forms of demonstration that has helped along the situations faced by states like West Virginia, Oklahoma, Kentucky, Colorado, and Arizona was marching on the capitol. What if we could do this here in Florida? Is it time for a little rally in Tally? It certainly has a nice ring to it and could easily be used as a hashtag to build further momentum during the summer and beyond. There are even two dates that would be perfect for taking this simple, effective action:

Monday, September 17th, 2018, which is U.S. Constitution Day, an idea that was originally proposed by retired educator and all-star public education advocate, Donna Yates Mace. Teachers from central to north Florida could easily drive up Sunday during the day, stay over night, march on / hold a rally in the capitol the next day, and then return home that evening. This would be a perfect time to celebrate democracy and demonstrate civic engagement to our students and communities (something the Legislature clearly thinks we don’t teach based on attempted legislation and CRC amendments). Furthermore, considering the primaries will be over by this point, it will send a strong message about voting for pro-public education candidates and hopefully all candidates will be addressing the need for increased funding for our students and schools.

And what better way to celebrate the spirit of Dr. Martin Luther King, Jr. himself than by marching / rallying again on Monday, January 21st, 2019, only a couple of weeks after committee work begins for the upcoming legislative session. Granted there probably won’t be any activity that day, but legislators will be there or returning for work on Tuesday. But if we can get tens of thousands of teachers to show up and get high-profile media coverage of the event, it would definitely put the Florida Legislature on notice.

We educators will no longer be silent about the damage being done by the gross lack of funding for our public education system. As MLK himself reminds us all: the time is always right to do what is right. The time is now. The fight is here. We can take action that doesn’t require us to strike yet still be “highly effective.” Just close your eyes and imagine it…a sea of red set out to #RallyInTally.

If you are curious about how #blockchain projects such as #Polkadot are going to shape our future, be sure to check out my new Twitter account, @ThePhunky1
Sprained my ankle rather badly last week, so I went to urgent care to ensure it wasn’t broken. Doc said stay off my feet for at least a week, but no matter where I am Richard Parker has got to get right on top of me!
Nothing beats a warm dryer... 😸
For all the #psychology students / fans in the house...this sign just cracked me up when I saw it 🤣
Two Pees, One Poop, and a PB Picnic
Lots of friends have been asking what I’ve been doing now that I’m officially on leave from @schschargers / @hillsboroughsch...

Want to Get Involved?

Teacher Voice is seeking guests to either write short posts (500 word limit) about current education issues or to discuss them in person for the biweekly podcast. Interested? Fill in the form on the Contact page or email directly at 1teachervoice@gmail.com